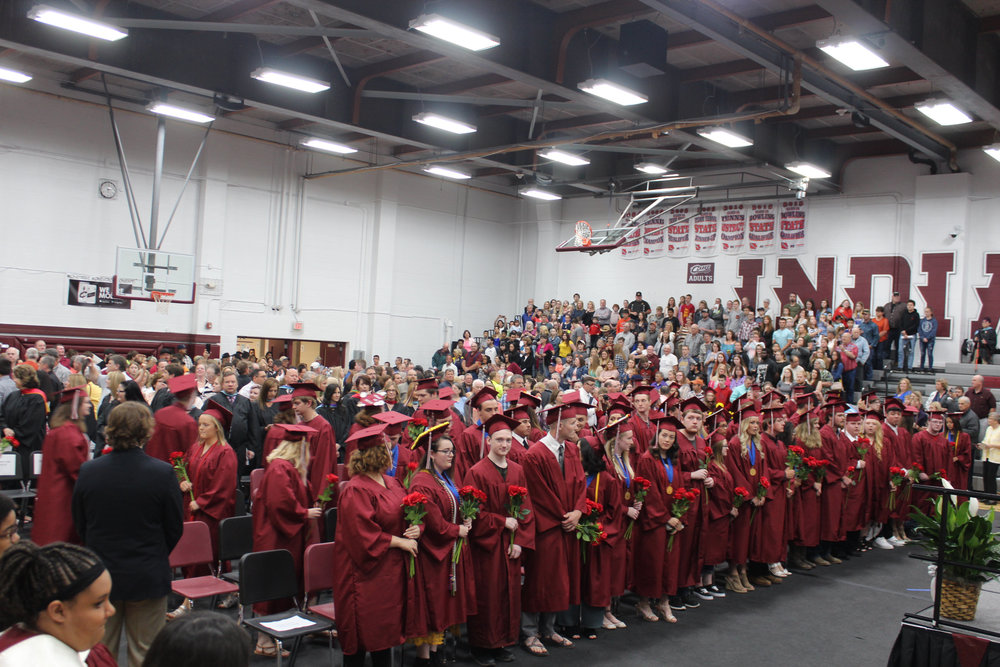 Senior Awards Night was held on Wednesday, May 15th at 7:00 p.m. in the Clarke School auditorium. Scholarships and awards were presented from various organizations, businesses, and post-secondary institutions. Shirley Diercks, representing Clarke Community Dollars for Scholars, presented 21 scholarships of $500 each. Throughout the evening, $75,000 in local scholarship money was awarded. The total scholarship amount is expected to top $500,000 once the All Iowa Opportunity Scholarship is announced later this spring. Additional highlights are below; a complete list may be viewed here.

Seniors celebrated their last day of school on Friday, May 17th. The day began at 8:15 with a special senior breakfast. Graduation practice followed at 9:00 and a class photo taken by Chris’ Photography followed at 10:00. Then, seniors boarded school buses to head to Clarke Elementary for the fourth annual senior walk.

The Class of 2019 was greeted by hundreds of smiling students lining the sidewalks and halls of Clarke Elementary. At the end of the walk, the seniors met the Class of 2031 (kindergarten) and a photo was taken. Mrs. Morgan, elementary school counselor, also congratulated seniors and returned to them their elementary career packets. Finally, the Class returned to Clarke Middle/High School for one last tour through the halls. In each building, “Pomp and Circumstance” played over the loudspeaker system during the walk throughs.

Graduation was celebrated on Sunday, May 19th at 2:00 p.m. in the high school gymnasium. Ninety-three students received a diploma during the 60-minute ceremony. A list of graduates may be viewed here. The graduation ceremony video is available on The Clarke Community Schools’ Facebook page.

Samuel Reynoldson was the class valedictorian. He gave a thoughtful speech that was both serious and humorous at times. He challenged his classmates to go forward and solve problems. For the first time in remembered history, there was a tie for the salutatorian honor. Both Emily Barajas and Megan Linskens received the award on stage. Other graduation student speakers included Susana Camacho-Preciado, Riley Domina, and Colby Wilken. The program may be viewed here.

The Class of 2019 didn’t leave the halls of Clarke High School without making their mark. They left behind business cards printed with the words, “There are 500 of these hidden around the school. Good luck getting rid of us.” Check it out here.

To the Class of 2019, we say to you: Your dreams are not too big, too silly, nor too unrealistic. You are our future. Dare to dream BIG and rise up! #WeRise #Classof2019