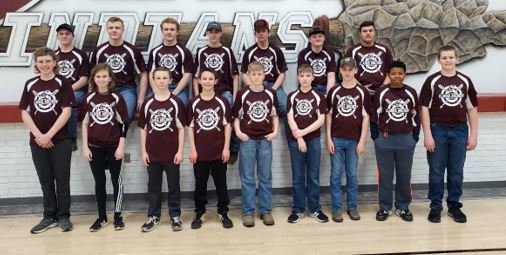 Clarke Community Schools started to participate in the National Archers in Schools Program (NASP) ran by the Iowa DNR five years ago. During the 2021/2022 season we had 54 archers ranging from 4-12th grades participate in the program and shoot in tournaments. The group above are the 20 that represented us at the State Tournament March 5-6th. To reach state an archer must a attain a specific combined score over their two best tournaments. A tournament consists of 3 flights of 5 arrows shooting at 10m and 3 flights of 5 arrows shooting at 15m. All bows and arrows must meet the standards set by NASP and cannot have sights on the bows. These archers as well as our other 34 represented our schools with immense pride.

As the State tournament wrapped up, Jairus Davis found himself placed overall at 23 of 1006 boys. Jairus shot a career-high 286, a goal he has had since 2020. Wyatt Cowling recorded the highest score for the Clarke Archers this season with a 287. Masan Redman topped our Middle School boys with a 274 earning a place of 43 of 443 MS boys. Nolan Redman scored a 255 ranking 37 of 172 Elementary boys. Both Libby and Izzy represented our Middle School in the girl’s division. In the weeks leading up to the State Tournament deadline, they both showed an immense amount of heart to get to state and deserved their positions on the shooting lines. As we look forward we will graduate out an amazing group of seniors, but we have a very strong base to carry on what they started 5 years ago. This group as well as our other archers already have their sights set on next year.

Many adults were needed to make this a successful season.  Thank you to Nathan Binning and Bert Houge for being the two primary coaches this past season.  Many other parents contributed throughout the year in helping to host a tournament, scheduling of meets/practices, donating of equipment, and organizing transportation and way too many other things to mention.